We put three castors to the test

Why buying Australian-made Fallshaw wheels and castors will save you time and money.

When buying castors and wheels, it can be tempting to choose the cheapest option—with the idea that all castors are the same ... but are they?

Not all castors are designed and manufactured to go the distance. Reasons why:

We want to help you to make an informed decision when it comes to buying best-quality products, so you don’t have to keep buying castors over and over again, nor be inconvenienced by having to replace broken castors, so we decided to put three castors to the test. 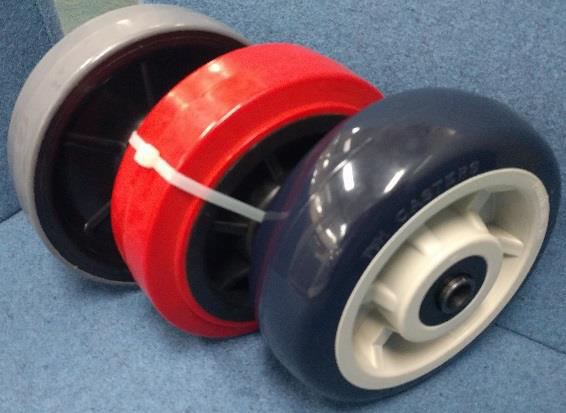 Pictured (from left to right): Fallshaw (Australian-made), EHI and QHDC castors (both imported).

In October we conducted rigorous performance tests of three similar castors – a Fallshaw castor (O Series HUR150/HZP), and equivalent castors from EHI and QHDC (both imported).

The objective of this test was to establish an operational load capacity at 4 km/hour, while establishing the maximum load which could be carried, while not showing functional impairment to the castor.

A breakdown of the Dynamic Test: 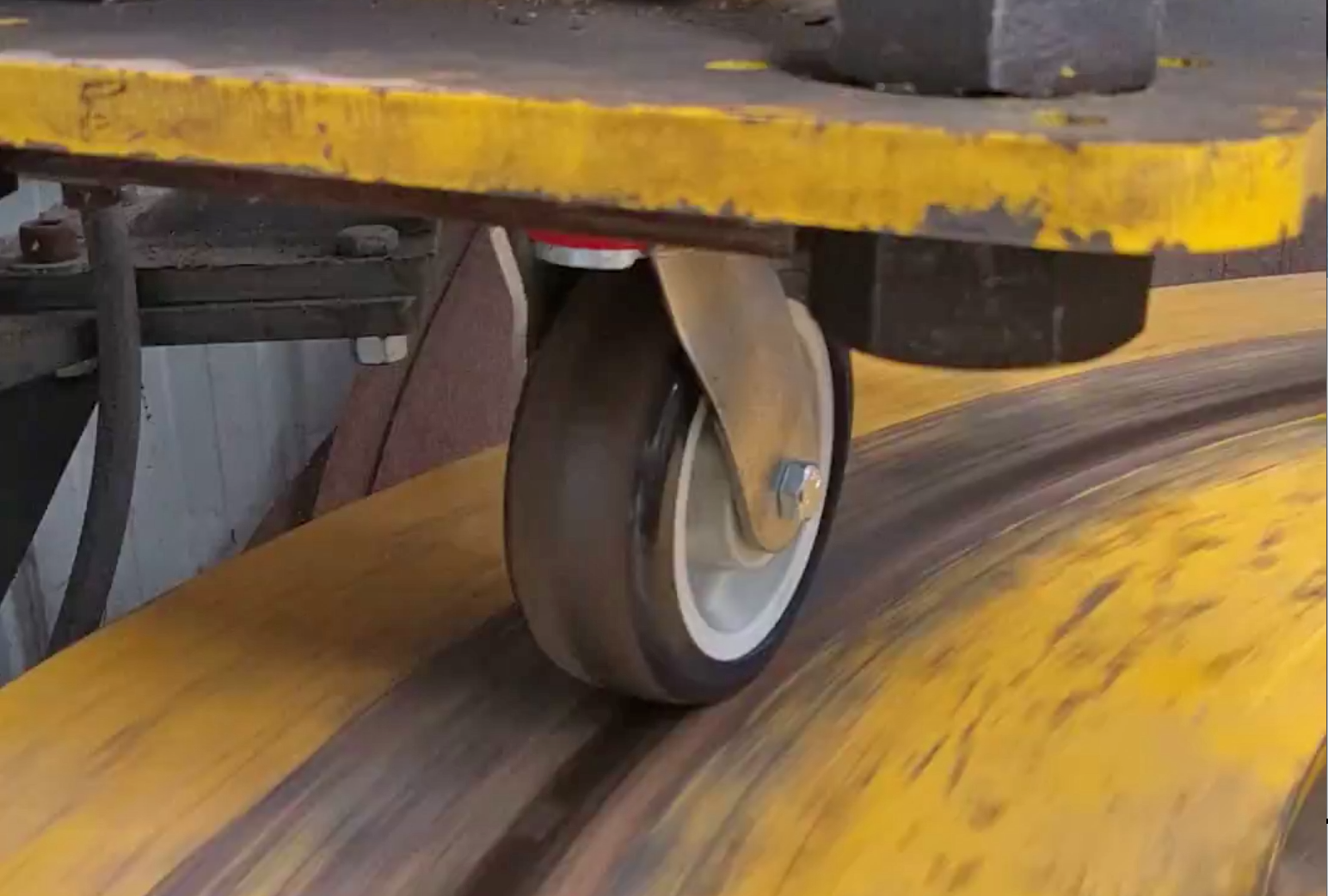 The Fallshaw sample completed the test and successfully passed.

There were no signs of failure with the tyre and centre bonding. This is due to Fallshaw’s manufacturing method of the wheel, and the choice of materials used. For example, when the urethane tyre is manufactured, the nylon 6 material is injection-moulded into the tyre while under pressure. Due to the high temperature, the centre bonds to the tyre in a 'chemical type' lock—providing maximum strength and durability. 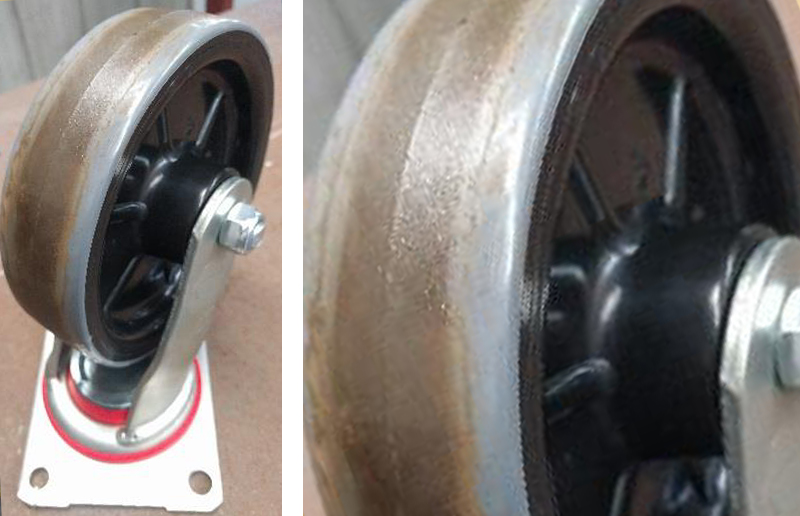 After the castor completed the 500 bumps, the tyre started to separate from centre.

This indicates a failure of the bonding between the tyre and the centre.

The castor displayed runout after 500 bumps and about 5000 revolutions of the wheel (with no bump).

After 600 bumps and around 1407 revolutions of the wheel would be classed as failed. This can still however be used—but it would be borderline.

The castor completed the test during which time, the tyre flattened due to bonding failure on the centre. (From new 51 mm to 59mm after test). 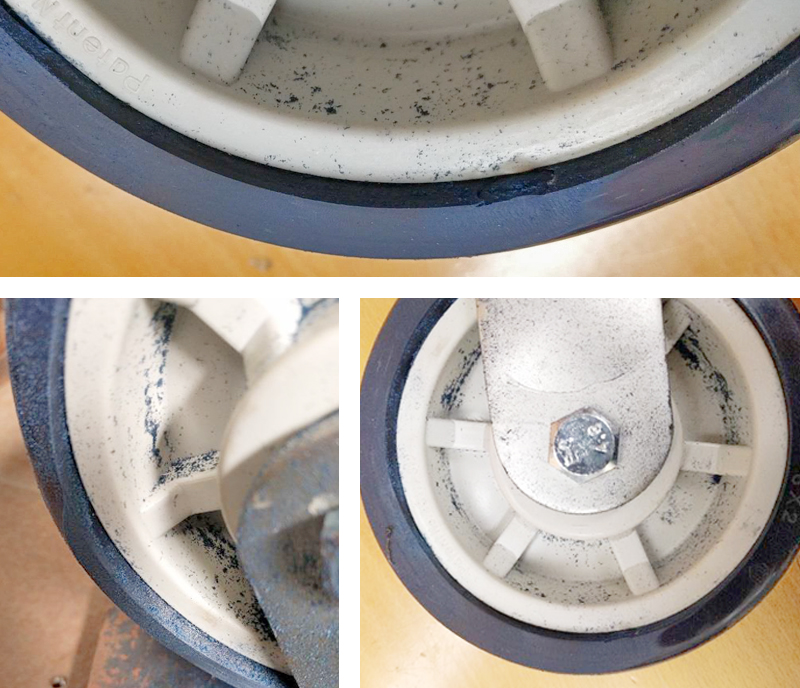 Pictured: The tyre has spread over the centre.

The castor completely failed at only 208 cycles into the 500 bump test. The bonding failed between tyre and centre, and bearing hub (centre) failed. 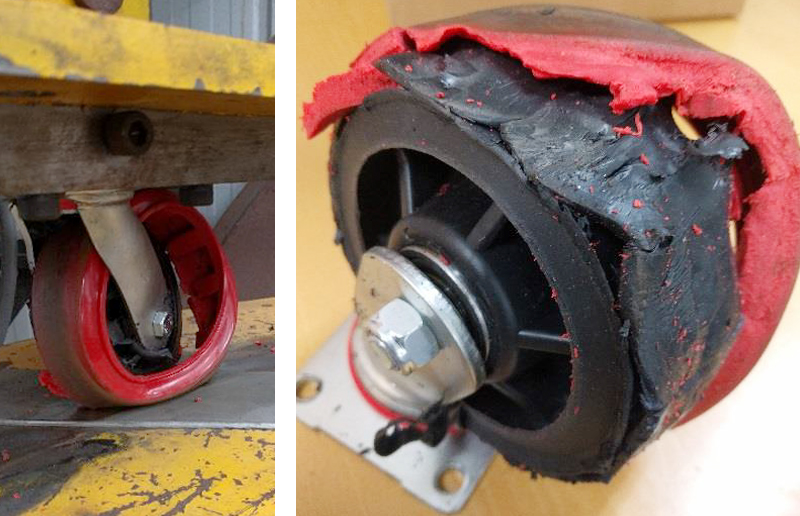 Pictured: The tyre has detached from the centre.

Under identical test conditions, the Fallshaw wheel outperformed both QHDC and EHI wheels.

The materials and manufacturing process plays an important role in determining reliability.

Fallshaw’s manufacturing process (bonding of the chemical lock-to-centre) and selection of materials (virgin urethane and a virgin nylon 6 centre) result in a superior product. This is also backed up with a three-year warranty.

The materials used by both imported brands consist of a polypropylene centre (which is about half the strength of nylon), and a urethane tyre. The manufacturing process used on the poly centre have proven to be made with a mechanical lock-to-centre—which failed the test.

Pictured (from left to right): Fallshaw, QHDC, EHI castors after the test.
mail_outline Sign up to our quarterly InFront newsletter, and receive our latest updates, specials and industry news.